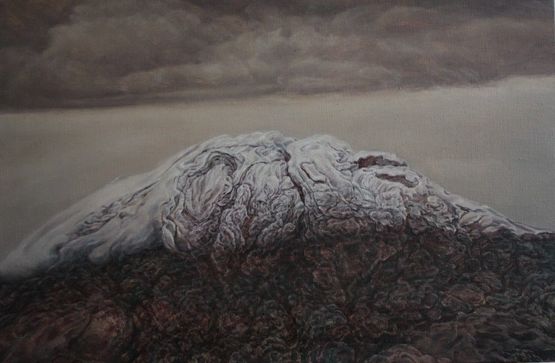 In the western traditions of landscape painting and abstraction, the challenging aesthetic condition called the sublime registers the failure of cognitive mastery as an encounter between the viewer and unknowable excess. My painting practice unsettles some of the patriarchal biases of these traditions and opens up a subjectivising terrain at odds with phallocentric rectitude, a discourse whose philosophical contours Adriana Caverero critiques in her book titled Inclinations: A Critique of Rectitude. In a similar vein, my ‘improper’ landscape painting practice registers an aesthetic and unspeakable matrix shaped by the folds and flows of libidinal and unconscious energies that register both trauma and transformation.
​
Living the Fold, frames the current ambitions of my painting practice, and builds on my previous projects and exhibitions titled Coming Alive, Taking Risks and Going South. All these projects register the impropriety of psychic and embodied energies that stalk our collective and social unconscious. Struggles with impropriety, and trauma, often start in our families. In my case, my father’s patriarchal and puritan values contributed to my mother’s descent into something like purgatory, and set me on a path towards a project for negotiating the trauma produced by those extensive power relations that service phallocentric interests and which regulate the psycho-sexual differences of women and men.

From within these knots, and over a long time, I developed a painting practice predicated on a repetitive, morphing and folding process in which unconsciously libidinal, or generative and open ended, energies, coursing across and between vision and my ‘blind’ hand and brush, are refigured as linearly intertwined three dimensional forms or constructions. Here, pulsing fractals translate static photographic images of geological events and traces, into ‘living’ forms that at times resemble vulnerable bodies without skins, viscerally marked spaces or improperly sexualised body parts.

These unspeakable, even monstrous, although also beautiful, figurative assemblages, inscapes and landscapes, are produced through processes that disperse traces of impropriety and trauma within aesthetic experience. Such subversion extends to the phallocentric biases of landscape painting and abstraction. To use spatial metaphors, these paintings are neither a haven for the horizontally grounded ‘self’, nor do they invite vertical rectitude or visual stasis. Instead they scramble the distinctions between selves and objects, bodies and landscapes; vision and visual dilation, and incline towards a relational register marked by vulnerability, subliminal solidarity and an infinite connectedness.

Insofar as this painting practice registers the shock of visceral vulnerability, as well as the failure of cognitive mastery and unsettles phallocentric hierarchies, such strenuousness might be offset against a different register where aesthetic processes deliver pulsing energies to visual experience and open up the risks, pleasures or ‘jouissance’ of ‘living the fold’. This title serves as a metaphor for a relational ethos (unmoored from the ego) which registers the resonances and energies of embodied and psychic life, always already at home in, but not confined to, practices of art that exceed semantic representation.