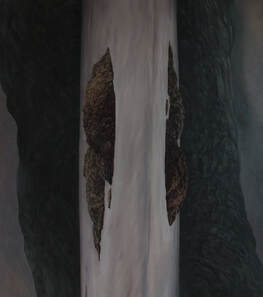 Double Desire 2018
Shimmering, beautiful and challenging paintings, whose energies, folds and intensities shape an embodied, subliminal inwardness, and invite a process for becoming undone by the play of differences.

In this artist’s commentary I map my understanding of how this painting practice delivers its pulsing affects, visceral vulnerabilities and vital potentialities by sketching some of its ambitions and methods for ‘becoming undone’ which involves a process where affects, ideas, emotions and intensities flow and fold between across one another. Those folds and flows, I suggest are portals to a collective  matrix and ‘inner life’, at odds with the repressions and regulations that shape some of our shared psycho-social dispositions. Gathering such quicksilvers is a delicate dance, not easily described, but one which bears the unconscious accumulations of my subversive and transformative sensibilities and social and discursive location.

​For some time now, I have scoured philosophy and cultural theory for clues about what might be at stake in what I understand to be a subversive and life-enhancing painting practice: ranging from Merleau-Ponty’s ‘chiasmic exchanges’ and critiques of dualistic thinking to Kristeva’s exploration of the the a-signifying affects of the ‘semiotic’ and its potential for subverting the signifying power of the ‘symbolic’. More recently under the rubric of the ‘Affective Turn’, I have been looking at the insights of scholars inspired by Deleuze, where affect is understood to be the performance of in-betweenness: of acting and being acted upon, which carry momentary intensities. Here these intensities pass from the organic to the inorganic, and affect is the name we give to those visceral and vital forces that lie alongside or beneath our conscious knowing. Embodied affect, so conceived, is situated along those seams where oppositions blur, fold, gather or slip. Affective living, anonymously and unconsciously performed along those dynamic seams, bears the accumulations, potential and legacies of everyday life and of our social and discursive construction.
​
On one level, these paintings register such affective accumulations as an engagement with sexual difference, sometimes inviting censure, insofar they mobilise the supposed impropriety of sexualised and libidinal body/landscapes by referencing ‘vaginal’ slits, ‘pregnant’ mounds, ‘clitoral’ lips or erect ‘phalluses’. Simon O’Sullivan has made the case that when art is viewed from the perspective of representation, as is the case of Marxian aesthetics, or conversely where Deconstructive aesthetics are implicated in the crisis of representation, experiential affect is side-lined. Instead for O’Sullivan affects occur in an a-signifying register, operating at an intensive ‘molecular level’ beneath and parallel to signification. Here we do not read affects, we only experience them. 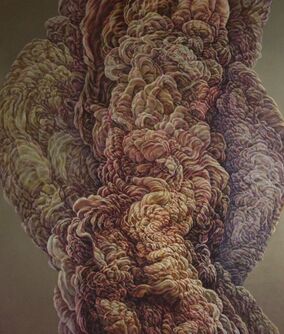 ​Coming Alive 2010
Yet, such affective experience is also discursively shaped by cultural and gendered values and practices. Simone de Beauvoir and Marion Iris Young have argued that the subject of experience is always already sexed and gendered. For Irigaray, we negotiate sexual differences by mobilising the differences between oppositions and in so doing unsettle the hierarchies that sustain inequality and repression across the sexual spectrum. For these feminist writers, the affective and embodied experiences of girls and women in patriarchal systems are shaped by a conflict between what the female body and psyche are allowed, or not-allowed, to be and do.  My painting practice, I understand, contests such phallocentric regulation by mobilising a transformative, subversive and affectively saturated aesthetic process which refigures desire, vulnerability, impropriety and psychic repression.

For me, this artistic journey has been shaped by a desire to be free from unequal and repressive hierarchies.  Indeed, also for imagining what such freedom might mean for both women and men struggling with the regulations and repressions of patriarchy, and with inequalities in general. This ambition has to some extent been realised in my exhibitions titled Coming Alive 2013, Taking Risks 2014, Going South 2015, Living the Fold 2017.  More recently such struggle and emancipation has been figured under the titles Toward Deep and Radiant Time 2018; and hopefully also in this new, and not yet realised project titled Undone: Ecstasies and Events.

These exhibitions also chart a critical and transformative project that addresses the western tradition of sublime landscape painting. Deep into this process I can now say that this engagement has been an opportunity to register the folding of my affective, psychic and embodied experience of being in the world, into a public discourse whose social distributions, masculinist and euro-centric biases and sensibilities, continue to shape who we think and feel we are in western culture. Such contestation extends to offering alternatives to that tradition of painting and its subjectifying protocols. For example, my practice revisits the ‘Ruckenfigure’, an anonymous self-substitute positioned at the edge of the time/space infinities of ‘the void’: a condition whose various existential anxieties are, and have been, a response to the contradictions of modernity, and which continues to be recirculated in art.  The vital body-landscape assemblages which inhabit in my painting practice, also figured at times as anonymous self-substitutes, address our being in the world by troubling both the emptiness of ‘the sublime void’ and the hegemonic status of the ‘sublime subject of the landscape’.
​
This painting practice also contests the presumption of infinite spatial extension that the traditional sublime subject/void couplet in painting delivers to the territorialising ambitions of western modernity. Instead my painting practice shapes a multi-directional interconnectedness, set in train by an oscillating, anti-representational and differentiating process whose accumulations unsettle linguistic, cognitive or territorial purchase.​ 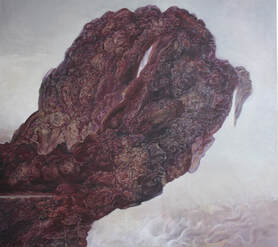 ​Taking Risks 2013
Difference in this context, is not simply the differences between oppositions, but as Elizabeth Grosz proposes, is best understood as a differentiating and dynamic force that delivers difference.  ‘Becoming undone’ in my painting practice, involves such a differentiating, disaggregating and life-enhancing force, where pulsing and proliferating affects and intensities open portals to a chiasmic inner/outer life that is necessarily fleeting and risky.
Such a performance is not identical to an experience of awesome immensity, existential crisis, or of an inarticulable and melancholy ‘Differend’ that has informed the traditions of sublime landscape and abstract painting.  Instead, the subliminal experiences produced by my paintings, bear the traces of an enfolded and relational unity of parts in a whole, which find expression in the ongoing, oscillating and enfolded interplay of differences, between and across, to name a few: body and landscape, drive and form, micro and macro, inner and outer, gathering and dispersal, vulnerability and transformation.​ 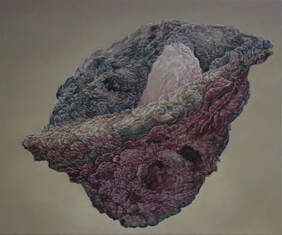 Going South 2014
These subliminal, visceral and vital forces, part of what Ranciere identifies as ‘the distributions of the sensible’, are themselves political and ethical, insofar as an aesthetically inflected and differentiating practice for ‘becoming undone’, I understand, is at odds with the plays of power that shape patriarchal, nationalistic, gender, class or race privileges and inequalities. Instead my affectively and psychically attuned painting practice invites ethical alternatives to those norms predicated on sameness, instrumentality, hierarchy and control.  Such an ‘ethics of difference’ I suggest, is a constitutive feature of those practices which enable us to negotiate some of the challenges of being human in an era of identity politics, climate change, artificial intelligence and globalisation.

​More Than Two 2018
In this brief commentary, which skips through a vast terrain, I have tried to locate this painting practice within a field of aesthetic, psycho-social, ethical, political, art historical and philosophical insights and potentialities. I have done so to shape some concepts for understanding and contextualising its oscillating and agonistic ‘grammar’ and the ethical and political value of such an estranging and transformative practice of difference. Yet this is also an incomplete frame for these subversive and pulsing body/landscape paintings, whose undoings, ecstasies and events, are available to all those who would see.